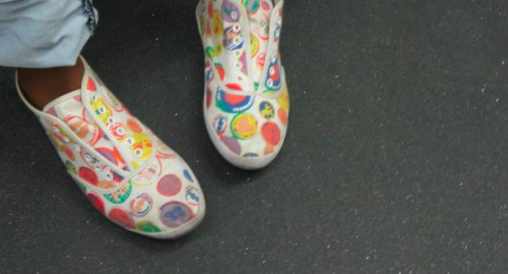 My uncle had already warned me about the city. On my first night, he pulled up a map on his computer. He explained the grid to me. “This is where you will go. I’m sorry I cannot take you there myself.” I nodded calmly, silently overwhelmed by the task at hand. Before this trip, I had never gone anywhere by myself.

In fact, before this trip, I had never wanted to go anywhere by myself. I was the sort of  person who took comfort in being part of a group. The only other holidays requiring air travel that I had taken at that point had been with family. Maybe once in a while, my parents would allow me to go on a beach trip with a handful of friends. But until this month, I had never been on a plane by myself. My mom even gave me a rosary in case of turbulence.

Now here I was, a wide-eyed 23-year-old about to be released into the jungle. I had saved all my money from the last three years, eschewing all invitations for ‘lesser’ trips from my peers. This little  seed money that I had, along with my Dad’s generous offer to give me his airline miles, allowed me to buy a round trip ticket. I was over the moon.

The very next day, my uncle once again explained the map very carefully. His wife even prepared a sandwich and a juice box for me to take along, like I was headed to my first day of kindergarten. They both looked at me nervously as I ate my cereal.

It seemed easy enough. Get on one train, switch platforms, get on the next train. Get off and head to the first exit to the left.  Unbeknownst to them, I had repeatedly drawn the map in the air right before bed. I mouthed the instructions to myself over and over. Note that this was a few months  before Google maps was made available on mobile. All I had was my free map, my uncle’s voice in my head, and my bravado.

I eyed the passengers of the first train curiously. It was 730am and our commute buddies seemed lost in their own thoughts. Some were bopping their heads to their iPod, others preferred reading the paper, but majority of them had the distinct disoriented look of morning tiredness. Pre-caffeinated or mid-caffeinated, they all looked like they could use another cuppa. So this is what the city does to you, I thought.

For whatever reason, I had decided to wear a white sun dress and a white bucket hat. I stuck out like a Powerpuff Girl in a Transformers movie.

My uncle brought me to the platform where I would switch trains. He tried to mask his worry, but I could see it in his eyes. “If you get lost, here is my mobile and office number. Call me and I will come get you.” He bid me goodbye, and took the next train to work.

The next train, I was told, would take me straight to my destination. The people on it seemed more awake than the previous one. Was it me, or did the air buzz with…. excitement? Energy? I wasn’t sure. Mu pulse quickened a little.

Even the clothes of the passengers on this train seemed more interesting. A woman in a suit and Chuck Taylors. An Asian woman wearing bright red headphones. A teenage boy with a skateboard. Another woman wearing patchwork sneakers. (Oh god, I thought. They better not see my juicebox.) An elderly man peered into my face from across my seat. He smiled. I tightened my grip on my canvas tote.

I watched my reflection in the darkened window, feeling the rails under my feet take me to where I was going. I had waited so long, so long for this to happen. My parents were very shocked when I had made that ridiculous announcement about my decision to spend my money on this ticket. “What if you get lost?” my Mom said. “What if your knee gives out again?” my Dad asked incredulously. I shook my head adamantly. I did not care. I had wanted to be here for such a long time.

Today was the day.

The train lurched to a stop and I joined the melee heading to the exit. My colleague wasn’t kidding: every one seemed to walk three times faster here than back at home. I picked up the pace, trying to match the locals as they made their way up the stairs to street level.

I remember the smell of concrete.

The sound of sirens in the distance.

The fragrant whiff of coffee when a man in a suit passed me by.

Street sounds became louder. My heart pounded in my chest. I deliberately slowed down at the last three steps. I bounded to the pavement. Then I turned around.

I made it. In a white sundress and a bucket hat.

Talking is my cardio. View all posts by chosandthecity